Jasmen Hunter is Ready to Make Her Mark in Hollywood 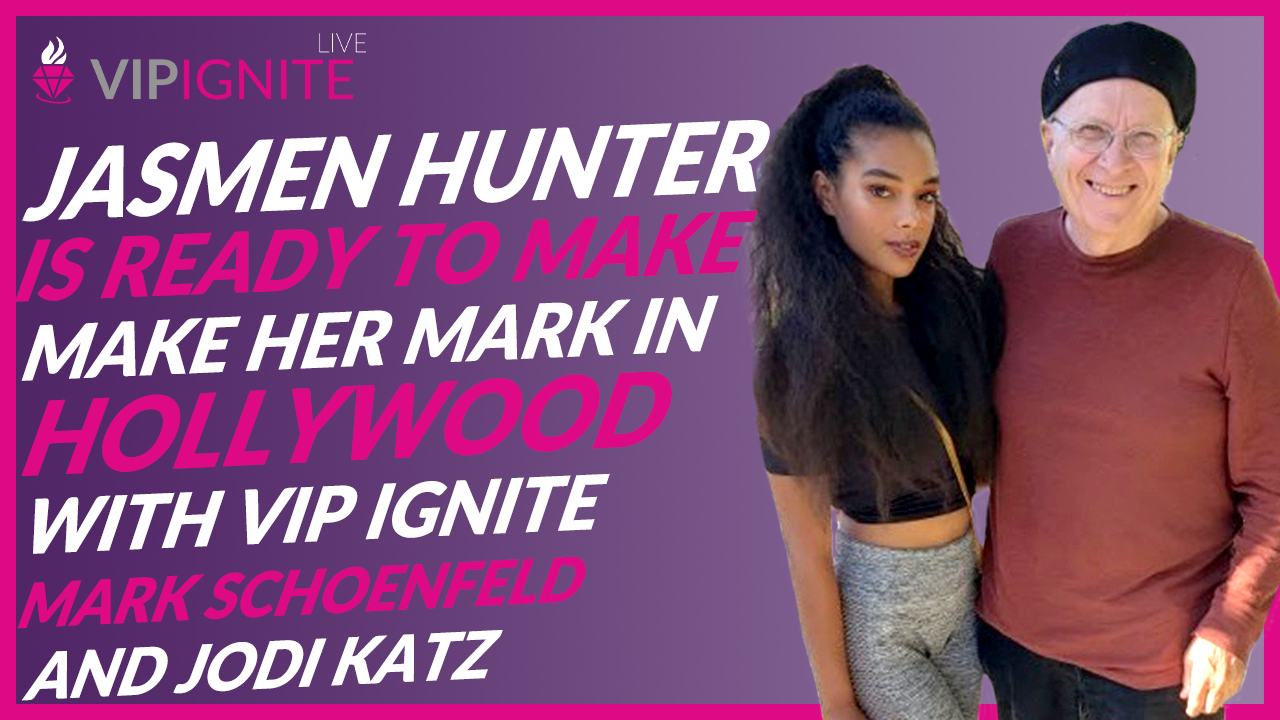 Remember Her Name: Jasmen Hunter ready to make her mark on Hollywood with the help of VIP Elite Talent Academy Coaches Mark Schoenfeld and Jodi Katz

Desire, determination, and drive — Jasmen Hunter has the necessary ingredients for stardom. If her impeccably-choreographed timing isn’t evidence enough to convince, her infectious charisma certainly will.

In her corner are two Manchester backers who know the ropes: Performer Jodi Katz and Hollywood impresario Mark Schoenfeld. Much like a prizefighter, Hunter has come out swinging. But, just as she was on the precipice of notoriety, illness took hold, forcing her to temporarily suspend her dreams. However, counting her out would be a miscalculated mistake. Confident and tenacious, Hunter is facing her setback due to Lyme Disease with fierce defiance, unwilling to allow opportunity to pass her by.

The now 22-year-old Hunter was adopted at the age of 2 and moved with her family from their original home of Hartford, CT, to Bedford, NH. Having spent her adolescence and teen years in Bedford, she graduated from Bedford High School and attended the University of Hartford. “I moved to New Hampshire early. New Hampshire feels like home,” Hunter says.

Hunter’s adoptive parents were always well aware of their daughter’s talent. “My parents told me I was going to be a star,” Hunter recalls fondly, “I had a pink sparkly outfit with a big star on the front and I would put on performances for the neighborhood.”

Growing into adolescence, she dabbled lightly in acting and performed in commercials. Then at 18- years-old, she met Mark Schoenfeld. Hunter was introduced to Schoenfeld by Bedford Regional Idol Scholarship Competition producer Edward Bordeleau, who first saw Hunter perform as a singer in a talent show at Bedford High School.

Bordeleau and Schoenfeld were acquainted in the 1980s, but lost track of one another over the years. They rekindled their friendship serendipitously, says Bordeleau. As he recalls it, he was tuning a piano one day for a friend, when “Mark walked in and almost the first thing he tells me is, ‘I’m looking for a superstar.'”

As luck would have it, Bordeleau knew a superstar in the making, in need of a mentor with connections, like Schoenfeld.

Hunter told Schoenfeld she wanted to be a Broadway star. Observant of the unique way she moved her hands while dancing, Schoenfeld saw something else in her. “When she danced while singing she was utterly unique and explosive. I’ve never seen anyone that explosive since a young Tina Turner burst on the scene in the 1960s,” said Schoenfeld.

What was scheduled to be a short audition turned into a four-hour meeting.

“I did one weird thing with my hand one time, one slight movement and Mark said, “Do the whole song like that,” recalls Hunter.

“At the end of it all [Mark] told her, ‘Don’t waste your time trying to break into the chorus line on Broadway. You have the potential to be a Popstar!’” says Bordeleau.

Known for his ability to zero in on performers with that “it” factor, Schoenfeld was ready to get to work with Hunter.

“I was tough on her. It wasn’t the Broadway that got to me, it was the movement. I put her through the paces because I saw something in her,” says Schoenfeld..

“Mark looked at me and said, ”You are a star,”  says Hunter.

Leery of Schoenfeld’s unexpected enthusiasm, Hunter, along with her parents, initially decided against moving forward. But, over time, Schoenfeld was able to convince Hunter, and her family, of his sincerity. Certain of her raw talent, Schoenfeld, along with one of his earlier proteges, Jodi Katz, offered to coach Hunter without charge.

“From then on out, I busted my ass,” Hunter says.

Hunter employs multiple influences in her dance style, from ‘80s pop signature moves to moves originating from the drag culture explored in the award-winning, groundbreaking film, Paris is Burning (1990). Waacking, an aggressive form of expressive dance that utilizes the hands and arms originating from Drag Balls and LGBT Nightclubs during the ‘70s, is one particular Drag Style Hunter employs.

“I love that people look at it and say, ‘That is MJ or some unique dancer.’ When I started doing this, I really didn’t have a reference for anything. Obviously, there are certain things that are very Vogue-ish, which I picked up on. I thought not a lot of people dance with their hands or their arms, it’s an old school thing. It’s not just raunchy sexy,” says Hunter.

When speaking of artists who inspire her, Hunter says, “I love Beyonce! I look up to  Ingrid Michelson, Sara Bareilles, and Katie Basden. I try not to idolize stars too much. We are all just people.” She shows her awareness and says, “With every artist, there is music you create for people and music you create for yourself.”

After eight months of coaching, Hunter found herself on her first-ever flight to Los Angeles.  While waiting for her flight, a nearby stranger asked if Hunter could watch her unattended luggage for a few moments. Upon her return, in prophetic form, the stranger looked at Hunter and stated, “You look like a star, can I have your autograph?”

Hunter recalls a memorable moment upon first arriving in LA, where she saw and met one of her childhood Idols, Josh Peck, of the former Nickelodeon TV series Drake and Josh.

“It wasn’t as much of me seeing a star…I’ve been in LA for who knows how long and look at where Mark is already taking me! I’m shaking hands and chatting with Josh Peck, as a colleague, not as a fan, and that was the moment that I realized this was real,”  Hunter states with excitement.

Schoenfeld booked meetings with Hollywood colleagues, including Broadway and Film Producer Scott Prisand. “She literally blew us away,” says Prisand. In turn, Prisand reached out to Producer and Director, Coy Middlebrook.

“Often, you can tell if someone is there for the right reasons, and I immediately identified that with her heart. Then, she performed and it was remarkable,” says Middlebrook, “She had an enormous amount of traction in eight days.”

“All this opportunity happened in eight days. Wherever I took her it wasn’t a home run it was a grand slam, everyone was taken by her! That’s the remarkable thing, you can be in Hollywood for twenty years, and never get an opportunity,”  says Schoenfeld.

Hunter’s “Eight days of wonder,” as Schoenfeld refers to it, took a sudden turn.

Hunter started to experience strange symptoms and extreme exhaustion. While performing for Grammy Award-Winning Mix Engineer, Dave Pensado — who according to Schonefeld, “… kept saying that the only time he felt this kind of star magic was when introduced to an unknown Jennifer Lopez and Brittney Spears.”

“It felt like an out of body experience. I was starting to feel under the weather at that point, looking back it was a bit disappointing…I didn’t feel the excitement I should have felt. He (Pensado) is not a man [known for easy] compliments, and he said some very amazing things about me. But when it wasn’t a big deal to me, Mark started to catch on.”

“After every performance, I collapsed. I started getting extremely sick and Mark is like, ‘What are you doing? Why are you frustrated?’  Finally, I said, ‘Mark, I think I am very sick,’ and that was hard for me to say because Mark is a go-go kind of person, and I thought, if I get sick this is all over. I was terrified to tell him,” says Hunter.

Hunter was diagnosed with Lyme Disease.

“I was able to work through that time in LA, come back home and get treatment,”  she says.

Lyme Disease is transmitted by the bite of an infected deer tick. According to the Mayo Clinic, its symptoms can include fever, chills, fatigue, body aches, headache, neck stiffness, and swollen lymph nodes in its earliest of stages, with more severe symptoms in its later stages.

Hunter got her drive back, forcing herself to become more active, incorporating meditation and yoga as regular disciplines. “I was able to get better and now I am feeling as great as I ever felt.” Hunter says.

Healthy and poised for her triumphant return in 2020, ironically, as fate would have it, COVID-19 gripped the nation. “As soon as she beats it … quarantine,” says Schoenfeld, disappointed but still confident that Hunter will find her way back.

Although the future remains cloaked, Hunter is unyielding, loyal to the resolute realization of her dreams. But, don’t call it a comeback…when the fog of this pandemic finally dissipates, Hunter just might find, she is not waiting for Hollywood, rather Hollywood is waiting for Hunter.